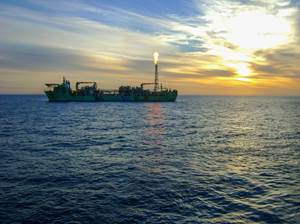 Norwegian engineering and construction Aibel shared a video of the FPSO arrival in Haugesund, towed by a Maersk Supply Service vessel.

In Norway, the Haewene Brim FPSO, built in 1996,  will undergo upgrades and life extension work.

While at Aibel's yard, the FPSO will also be upgraded to allow for gas export, the Norwegian firm said.

According to World Energy Reports' FPSO database, Aibel's work on the FPSO will also include replacing the integrated control system on the FPSO.

Back in 2019, Shell and its partner Ithaca Energy (UK) Limited took a final investment decision on the Pierce Depressurisation Project in the UK Central North Sea, with the plan to start exporting gas from the Pierce field.

Shell said at the time that the investment would go towards modifying the Haewene Brim. The work also includes installing a sub-sea gas export line from the FPSO to the SEGAL pipeline, and the drilling of new wells.

Once back at the Pierce field, the FPSO is expected to produce more than 30,000 barrels of oil equivalent per day at peak production.

Per World Energy Reports, the double hull floater was originally built by Samsung for Navion/Bergesen as a multi-purpose shuttle tanker. The original name was Berge Hugin. It was later modified for use as FPSO at Aker McNulty after short use as a shuttle tanker. Bluewater bought it in 2001.