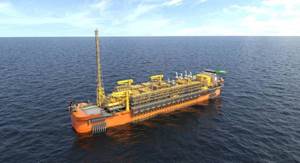 A string of new projects will help boost revenues at SBM Offshore, the oil and gas services company said on Wednesday, after reporting an expected 15% drop in the first quarter due to weakness at its turnkey business.

The Dutch-based company's turnkey division builds and sells floating production and storage vessels to oil and gas firms and so is highly sensitive to spending by its customers.

These customers slashed investments last year as oil demand plunged in the pandemic, but a recovery in energy prices has since buoyed their earnings.

It pointed to four floating production storage and offloading (FPSO) units under construction, saying they would contribute to earnings in the future as the vessels commence production.

Last February, the group signed with Brazilian Petrobras a letter of intent for a 26 years and three months lease and operate contract for FPSO platform Almirante Tamandaré for the Búzios field in the Santos Basin, set to be one of the largest oil producing unit in the world.

"Despite the continuing challenging environment due to the pandemic, our operating performance was strong and our major projects under construction are progressing as expected," Chief Executive Bruno Chabas said in a statement.

With revenues of $513 million in the quarter, the company confirmed it expects 2021 revenues to reach about $2.6 billion. Around $1.6 billion is expected from its lease and operate business and about $1 billion from turnkey operations.

SBM's lease and operate division, which runs and leases vessels later sold to customers after an initial lease period and relies on multi-year contracts, saw a 12% drop in first-quarter revenues.