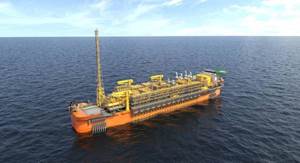 The Dutch company, which supplies floating oil and gas production vessels, now predicts 2021 revenues of "above" $2.3 billion, from around $2.6 billion previously.

SBM said it assumed the divestment of the FPSO Almirante Tamandaré was closed after year-end, resulting in a shift in recognition of the associated revenues from 2021 to 2022.

The group signed contracts last July with Petrobras for the 26.25 years lease and operation of the platform, set to be deployed at the Búzios field in the Santos Basin.

Amsterdam-based SBM added there was no impact on anticipated earnings before interest, tax, depreciation and amortization, as the project is not forecast to meet the requirements that would allow margin recognition this year.

It, therefore, maintained its core profit guidance at about $900 million for 2021, after reporting 9-month revenues of $1.73 billion against $1.71 billion a year earlier.

The company still expects its lease and operate business, which relies on multi-year contracts and allows it to generate cash in periods of lower oil prices, to bring around $1.6 billion to full-year revenues.

It sees a contribution from its turnkey business of above $0.7 billion, against $1 billion in a previous estimate.

Sensitive to cuts in capital expenditure by oil and gas customers as it builds and sells floating production and storage vessels, the turnkey division brought in $519 million to revenues, up 10% year-on-year.

Big oil companies have benefited in the third quarter from an energy crunch that pushed Europe's natural gas prices to record highs.