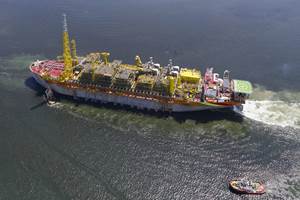 For 2019, SBM Offshore now expects earnings before interest, tax, depreciation and amortization (EBITDA) of about $800 million on revenues of around $2.1 billion, an increase from prior forecasts of above $750 million and above $2 billion respectively.

"We increased our EBITDA guidance for the full year based on better-than-expected results in turnkey and solid performance in lease and operate," said Bruno Chabas, CEO of SBM Offshore, in a statement.

The turnkey division builds and sells floating production, storage and offloading vessels (FPSO) to oil and gas firms while SBM's lease and operate division runs and leases the vessels, which get later sold to customers after an initial lease period.

Turnkey year-to-date revenue almost doubled to $498 million while the lease and operate segment fell 1% to $972 million but was in line with the company's historical average of 99% uptime, SBM said.

SBM Offshore generated a total revenue of $1.47 billion over the first three quarters of 2019, an increase of 18% year-on-year.