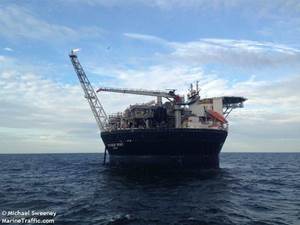 The UK oil and gas operator Premier Oil has field decommissioning plans for the departure of the Voyageur Spirit FPSO and the removal of the riser system from the Huntington offshore oil field in the North Sea.

The Huntington Field is located in block 22/14b of the Central North Sea, approximately 230 km from Aberdeen, in a water depth of approximately 89 meters. The cylindrical FPSO with a storage capacity of 270,000 barrels has been producing oil from the North Sea oil field since 2013. Produced oil is stored in cargo oil tanks and exported using shuttle tankers.

Premier oil said, "Premier Oil has investigated various alternative production strategies to further extend the life of the Huntington field, but no viable alternative to decommissioning has been identified..."

The Huntington field will continue production via the FPSO until relevant notices are made to cease production.

The Voyageur Spirit will be used for the initial decommissioning activities, namely the flushing/de-oiling of the subsea infrastructure i.e. manifolds, risers, subsea pipelines and umbilical, and to support with the implementation of positive isolations.

Premier has proposed for the FPSO to be removed from its current location. According to Premier Oil, Teekay will look for an arrangement to redeploy the floating production unit elsewhere.

Activities associated with subsequent decommissioning stages of the subsea pipelines, umbilical, risers, and other subsea infrastructure will require the services provided by other specialist vessels.

The early removal of this Installation will not prejudice any further decommissioning work in the Huntington Field, Premier has said, explaining that the remaining Huntington field infrastructure will be subject to a separate Decommissioning Programme at the end of field life.