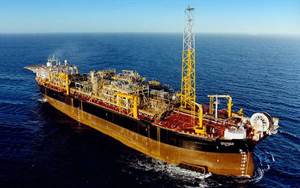 MODEC, which sees Brazil as its main market, said last Thursday it had received a notification from Petrobras "that its eligibility to participate in new competitive bidding by Petrobras has been suspended for 13 months from March 31, 2021."

According to the notification, as shared by MODEC, the main basis for this administrative sanction "is losses to Petrobras presumably caused by the performance of three Floating Production Storage and Offloading (FPSO) vessels under charter services that MODEC has provided in the past and/or is presently providing to Petrobras."

"There is no expectation of further developments or implications, including on MODEC’s financials, as this administrative sanction does not impact the execution of the current contracts in place between MODEC and Petrobras," MODEC said.

"MODEC remains committed to improving its practices, in order to eliminate any issues in its activities under the current contracts. MODEC continues to see Brazil as its main and most promising market, and reaffirms its commitment to the oil and gas sector, with the excellence that has always been linked to its name during the more than 15 years in Brazil, with its employees, customers and suppliers," MODEC added.

On Friday, a day after the announcement of the Petrobras suspension, MODEC said its President and CEO Yuji Kozai would be replaced by MODEC director Takeshi Kanamori.

MODEC said Friday that Kozai had "offered to resign from the office of Representative Director, President & CEO, as well as the office of Director, for reasons of ill-health."

"The [management] changes are also to further drive growth and increase corporate value under new leadership amidst changes in the business environment," MODEC said.

Kozai, who will now serve as an executive advisor, will be replaced by Kanamori who has served as Executive Vice President in MODEC.