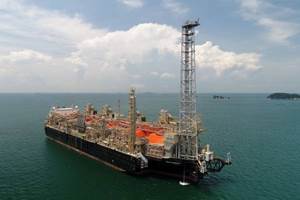 Oil and gas company Perenco and Cameroon's national oil firm SNH have agreed with Golar LNG to increase the utilization of the FLNG Hilli Episeyo - Africa's first FLNG in operation and the world’s first converted FLNG.

The Hilli Episeyo FLNG vessel moored offshore Cameroon and producing from SNH and Perenco's offshore gas fields, started producing in March 2018.  The initial agreement was for the use of two of the four liquefaction trains and provided Perenco and SNH the option to increase liquefaction production.

Back on March 31, when announcing its quarterly results, Golar FLNG said that the FLNG Hilli Episeyo was offloading 56th cargo, with 100% commercial uptime maintained.

It, at the time, also said it had executed all remaining documentation required to remove the cap on gas reserves available for liquefaction by the Hilli, enable production above the current contract capacity, and that it was in advanced discussions on additional production by Hilli anticipated to start-up in Q1 2022.

Now, under the new agreement, Golar LNG said Tuesday that starting in 2022 the capacity utilization of the FLNG, located in Cameroon waters offshore Kribi, would increase by 200,000 tons of LNG, bringing total utilization in 2022 to 1.4 million tons.

Golar LNG said the tolling fee for the 2022 incremental capacity is linked to European gas prices at the Dutch Title Transfer Facility.

"At current average 2022 TTF gas prices (avg. $8.70/MMBTU for 2022) the increased capacity utilization represents an expected US$26.1m in incremental Adjusted EBITDA. For each US$1.00/mmBtu change in TTF, this Adjusted EBITDA will increase (or decrease) by US$3.7m," Gollar LNG said.

Apart from the 2022 capacity increase, Perenco and SNH plan to drill and appraise two to three incremental natural gas wells during 2021 and subsequently upgrade upstream facilities in 2022 to support further sustained increases in production from 2023 onward.

Under the Agreement, Perenco and SNH are granted an option to increase capacity utilization of Hilli by up to 400,000 tons of LNG per year from January 2023 through to the end of the current contract term in 2026.

"This has the potential to increase total annual LNG production from Hilli to 1.6 million tons from January 2023 onwards. The tolling fee for the 2023+ incremental capacity will also be linked to TTF.

"Based on current average 2023 TTF gas prices ($6.72/MMBTU avg. future price for 2023) the additional 400,000 tons of production would generate US$30.4m of incremental annual Adjusted EBITDA. For each US$1.00/mmBtu change in TTF, this Adjusted EBITDA will increase (or decrease) by US$7.4m. The Option must be declared during the third quarter of 2022," Golar LNG said.

"At current TTF future prices, and assuming the Option is exercised, the incremental Adjusted EBITDA backlog of the potential increase in capacity utilization for Hilli from 2022 until July 2026 is expected to be around US$113m," the company said.

Golar has an 86.9% economic interest in the incremental Adjusted EBITDA generated as a result of the agreement. The agreement will not change any existing terms, conditions, tolling fees, or the Brent Oil link associated with trains 1 and 2.

"The innovative tolling fee arrangement delivers on our announced strategy to increase our upstream LNG and gas exposure. Today’s announcement is a further testimony to Hilli’s strong track record of 100% commercial uptime since delivery in 2018 and will benefit all stakeholders involved in the project, as well as bringing us closer to our target to reach full capacity utilization of Hilli.”