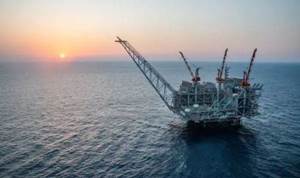 The energy companies that own Israel's offshore Leviathan gas field are seeking partners to build a floating liquefied natural gas (FLNG) platform and possibly to explore for oil in ultra-deepwater, a CEO from the group said.

Leviathan, one of the world's biggest offshore gas discoveries of the last decade, has turned Israel into an energy exporter in a tumultuous region and has weaned it off more polluting imports, notably coal.

It began exporting in January and is already supplying Israel, Egypt, and Jordan with natural gas.

The group wants to expand production and aims to make an investment decision this year on the way forward. Central to progress will be a multi-billion dollar FLNG terminal that would float in the eastern Mediterranean and allow exports to Europe, Yigal Landau, CEO of Ratio Oil, a minority partner in Leviathan, told Reuters.

"FLNG has an advantage in that you are not dependent on geopolitics," he said. "It gives export independence."

Pipelines that connect to LNG plants in northern Egypt or to Europe directly are additional options.

Ratio, along with partners Delek Drilling and Noble Energy, is already talking with Bermuda-based Golar LNG and Belgium's Exmar to invest in and build the floating terminal. "Whoever is the best, cheapest and most fitting for us will be chosen.

Then one of them will become a strategic partner in the project itself," Landau said.

He estimated the FLNG terminal could be operating in three years. Adjustments to the current production platform alone would require $1 billion, he said, in addition to the cost of constructing the terminal and drilling wells.

Before being able to invest, the partners would need to secure firm contracts with customers. The Leviathan field is located about 120 km (75 miles) off Israel's coast in water deeper than 1.5 km.

The group believes oil may be hidden beneath the gas. It's a risky and costly venture, especially as the investment climate in the developed world is shifting away from climate-warming fossil fuel.

But depending on further seismic analysis and the right market conditions, Landau said they would like to bring in an oil major to tap any reserves. "We will feel more comfortable with a strategic partner that has the know-how and experience," he said.

In October, Ratio won eight licenses to explore in Israeli waters. Its sister company Ratio Petroleum is exploring for oil, together with ExxonMobil Corp, off Guyana's coast and in Suriname with Tullow Oil and Pluspetrol.