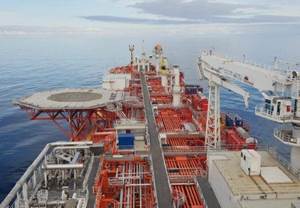 Knutsen NYK Offshore Tankers AS (KNOT), a NYK Group company, has concluded a time-charter contract for a maximum 15-year period starting from 2021 for a shuttle tanker with French oil and gas giant Total for its Brazilian activities.

The contract aims to use a 152,000 DWT Suezmax tanker equipped with a dynamic-positioning system built in China by COSCO (Zhoushan) Shipyard Co., Ltd. to shuttle crude oil produced in waters off Brazil.

Knutsen NYK Offshore Tankers AS (KNOT) is a joint venture company between NYK (which  has a 50 percent share) and TS Shipping Invest AS (TSSI), the parent company of the Knutsen Group. The KNOT Group has a share of about 40 percent of the world shuttle tanker market (not including the number of vessels on order and shuttle tankers in Russia).

With this new building, the KNOT Group will have 32 shuttle tankers in operation or on order.

In accordance with its medium-term management plan “Staying Ahead 2022 with Digitalization and Green,” the NYK Group will continue its efforts to provide stable and economical energy-transport services in the shuttle tanker and offshore businesses.

Shuttle tanker is called a “floating pipeline,” a shuttle tanker loads crude oil from floating production, storage, and offloading (FPSO) units in deepwater ocean fields while maintaining a certain distance, and then transports the oil to crude-oil storage units or petroleum storage stations on land.