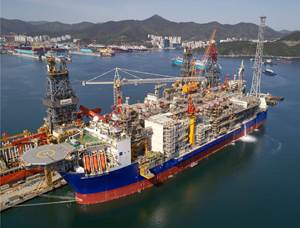 DSME said in a stock exchange INPEX had filed a request for arbitration at the International Chamber of Commerce.

In a stock exchange announcement last Friday, DSME said the case was related to an FPSO order made by INPEX in 2012, and that the FPSO was completed and departed from Okpo Shipyard in 2017, ready for commissioning to start production off the coast of Australia by 2019.

According to World Energy Reports, first production from the 336 meters long FPSO started in July 2018.

While the company did not identify the project by name, the companies involved and the dates provided correspond to the delivery date of INPEX’s Ichthys Venturer FPSO, built for Inpex's Ichthys project in Australia.

DSME said Friday that INPEX had filed a claim for damages, claiming delays and defects in the commissioning preparation work.

"In this regard, the company determines that the amount of compensation and the grounds claimed by INPEX are unreasonable,” DSME said.

"We are currently preparing a response to INPEX's claim and arbitration request, and we plan to respond according to the arbitration process in the future," DSME added.

According to data on INPEX's website, 17 offshore condensate cargos were shipped from the Ichthys Venturer in the first half of 2022. The FPSO can produce around 100,000 bbl/d at peak.