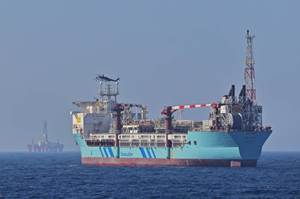 Hurricane Energy plc, an oil and gas company that produces oil from the Lancaster field off the UK, is facing business wind-down unless it agrees a shorter charter extension for the Aoka Mizu FPSO than originally agreed.

The company, which started producing from the Lancaster field west of Shetland in 2019 using the FPSO, said Friday it would not extend the charter of the Aoka Mizu FPSO for a period of three years from June 2022 to June 2025 on current terms.

However, Hurricane, which last year significantly downgraded Lancaster reserves estimate, said that it was open to a shorter FPSO extension. If a deal is not reached, this could lead to a wind-down of the company's business.

The three-year initial term of the bareboat charter expires in June 2022, unless, by June 4, 2021, the company has exercised an option to extend for a period of three years, to June 2025.

"Based on the contractual terms for the three-year extension and the current Lancaster production forecasts, the company does not believe it is in the best interests of the Company and its stakeholders to exercise the option in its current form to extend the Aoka Mizu lease to June 2025, given the significant financial obligations this could entail. Accordingly, it has resolved not to do so," Hurricane Energy said Friday.

Still, the company said it remained in talks with FPSO owner Bluewater Energy Services over an alternative extension to the bareboat charter for a shorter period than three years.

Bluewater did not immediately respond to Offshore Engineer's request for comment.

To remind, Hurricane last year said the potential of its Lancaster field was much smaller than originally thought, and could not "support the level of debt in the company which was sized for a much larger Reserves and Contingent Resources base."

Hurricane's unaudited estimate of 2C contingent resources in the Lancaster field was in 2020 reduced to 58 MMbbls remaining from 486 MMbbls in the 2017 CPR.

The estimated remaining Lancaster 2P Reserves were 7.1 MMbbls at December 31, 2020, based on future production from the 205/21a-6 well, the only producing well at the field.