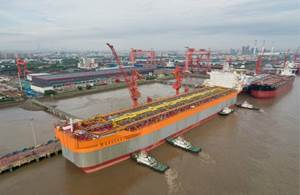 U.S. oil major ExxonMobil has reached a final investment decision on a $9 billion offshore oil development project in Guyana, following the approval by the government.

To remind, Reuters last Friday reported that Guyana was close to reaching a deal with Exxon to green-light the project "after the company committed to stricter environmental restrictions on gas flaring and wastewater."

The project, called Payara, will target an estimated resource base of about 600 million oil-equivalent barrels. Ten drill centers are planned along with up to 41 wells, including 20 production and 21 injection wells.

The Payara, Exxon's third project in the country will be developed using the Prosperity FPSO, the hull of which was recently launched in China's SWS Shipyard. The FPSO to be delivered by SBM Offshore will be able to produce up to 220,000 barrels of oil per day. The first oil is expected in 2024.

ExxonMobil’s first offshore Guyana project, Liza Phase 1, began producing in late 2019, via the Liza Destiny FPSO. The Liza Phase 2 is on track to begin producing oil by early 2022. It will produce up to 220,000 barrels of oil per day at peak rates using the Liza Unity FPSO, which is under construction in Singapore.

Apart from the Payara, ExxonMobil said it was evaluating additional development opportunities in the giant Stabroek Block, where it has recently made its 18th oil discovery.

The development projects being looked at are the Redtail, Yellowtail, Mako, and Uaru. Exxon said it planned to have five drillships operating offshore Guyana by the end of this year.

The Stabroek Block is 6.6 million acres (26,800 square kilometers) with current discovered recoverable resources estimated at more than 8 billion oil-equivalent barrels. The 18 discoveries on the block to date have established the potential for at least five FPSO vessels producing more than 750,000 barrels of oil per day by 2026, ExxonMobil said.