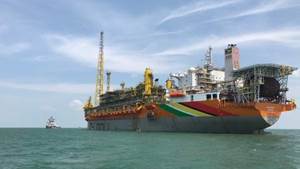 Oil producer Guyana could resume talks with India for a deal to sell the government's share of crude as output rises next year, the South American nation's vice president told Reuters.

Earlier this year, Indian refiners bought at least two test cargoes of Guyana's Liza light sweet crude. But government-to-government negotiations on a term supply agreement stalled on price and other contract terms, and Guyana later struck a one-year marketing deal with a unit of Saudi Aramco.

Guyana produces up to 120,000 barrels per day of crude through a consortium led by Exxon Mobil from a single floating production storage and offloading system (FPSO) [Liza Destiny]. The group has discovered about 10 billion barrels of recoverable oil resources off the coast of Guyana.

"We have much more oil coming on the market because, from early next year, we will have the new FPSO, which will be producing double the amount than the current FPSO", Guyana Vice President Bharrat Jagdeo told Reuters late on Wednesday.

Guyana is willing to resume talks with India for future oil sales, but the Indian government will have to be "competitive," Jagdeo said.

Liza crude, which began flowing to the market in early 2020, has been exported by the project's partners mainly to Panama, where the oil is stored and later shipped to Asia and other destinations, according to Refinitiv Eikon tracking data.

Exxon also has tested the crude at its U.S. refining system, while Guyana, which does not have refineries, has picked up marketing agents to allocate its share of production. (Reporting by Neil Marks, additional reporting and writing by Marianna Parraga; Editing by David Gregorio)