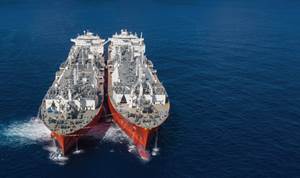 U.S.-based LNG firm Excelerate Energy said Thursday that it had signed a term sheet with ENGIE for the deployment of a floating storage and regasification unit (“FSRU”) that will provide flexible and secure LNG regasification capacity for Germany as it continues to seek alternatives to Russian pipeline gas supply.

Under the proposed agreement, Excelerate would deploy an FSRU from its integrated fleet to provide regasification services for a period of five years at Germany’s fifth planned LNG import terminal, which is being developed at the port of Wilhelmshaven by Tree Energy Solutions ("TES") and ENGIE.

Back in May, the German government signed charter agreements for four floating storage and regasification units (FSRUs). Read More Here.

“This term sheet represents an important milestone in our commercial negotiations to support the development of a new FSRU import terminal in Germany,” said Oliver Simpson, Commercial Vice President of Excelerate. “We look forward to collaborating with ENGIE and its partners E.ON and TES to support Germany as the country seeks to enhance its energy security and achieve its decarbonization goals.”

"The deployment of an FSRU to Germany would significantly increase the Company’s presence in the European market," Excelerate Energy said.

In May this year Finnish state-run gas transmission system operator Gasgrid agreed a 10-year charter of an FSRU with Excelerate Energy.