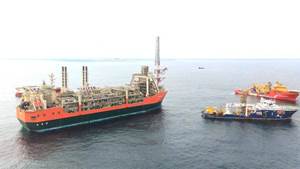 First oil has started flowing from the BP-operated Alligin field in the West of Shetland region, offshore UK.

Alligin is a part of the Greater Schiehallion Area and has been developed as a two-well subsea tie-back into the existing Schiehallion and Loyal subsea infrastructure and the Glen Lyon FPSO unit.

"The project’s performance has been better than expected, however, reaching 15,000 barrels gross of oil equivalent a day at peak since start-up in late December," BP said Tuesday.

BP North Sea Regional President Ariel Flores said: “Achieving first oil from the Alligin field safely, under budget and ahead of schedule is testament to the performance of the project team and their agile approach to planning and execution.

“Alligin is part of BP’s advantaged oil strategy, a development with a shorter project cycle time with oil that is economic to produce and low risk to bring to market. Subsea tiebacks like this complement our major start-ups and help underpin our growing portfolio west of Shetland.