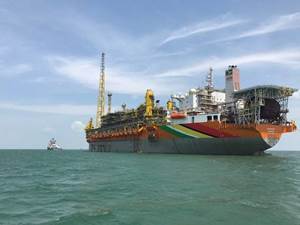 Exxon Mobil Corp said on Tuesday it has made two new oil discoveries offshore Guyana and that it has already exceeded its original year-end daily production target for the South American country.

The announcements are part of Exxon's efforts to accelerate production in Guyana and to invest in long-term megaprojects that offer lower costs and lower carbon emissions per barrel. A group led by Exxon started production in the tiny nation of 750,000 people in 2019 and currently controls all output in Guyana.

"Exxon and its partners continue to accelerate exploration, development and production activities for the benefit of all stakeholders, including the people of Guyana," Liam Mallon, head of Exxon's upstream company said in a statement.

The U.S. major said it is already producing more than the 340,000 barrels of oil equivalent per day (boepd) target it had originally set for itself by the end of 2022 in Guyana.

Exxon's partner Hess said in a follow up statement the group's current production has reached 360,000 boepd. The increase was possible after optimization works that expanded capacity of the consortium's first platform Liza Destiny by 20,000 boepd to 140,000 boepd, Hess said.

The second platform, Liza Unity, started in February and ramped-up to 220,000 boepd in five months.

Guyana amounts for one third of the crude discovered in the world since Exxon first hit oil in the country in 2015, according to Rystad consultancy firm. The about 11 billion barrels of recoverable oil discovered to date should make the country a global oil power in the coming years, Rystad says.

Exxon has announced an average of one discovery per month this year. The two new oil discoveries - Seabob and Kiru-Kiru - take the total number of discoveries to more than 30.