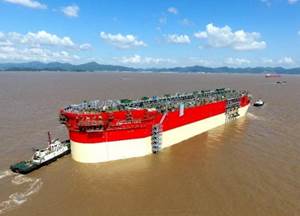 The Mediterranean-focused oil and gas company Energean might see further delay with the delivery of its FPSO hull from China on the back of the Coronavirus outbreak in the country.

Just last week, Energean said that the delivery of the hull of the FPSO designed to develop Energean's Karish offshore gas field in Israel would be delayed for March 31 - a delay of 3.5 months.

Energean, which at the time gave no mention of the coronavirus and its potential effects, said the Energean Power FPSO was "on track to deliver first gas in 1H 2021."

However, the Greek oil and gas company on Thursday issued an update, acknowledging the potential impact of the deadly coronavirus on the FPSO hull construction.

Energean stressed that the virus has spread in most provinces in China and that several countries have issued emergency transportation restrictions as a means of prevention of the spreading of the virus.

This has had an immediate impact on the availability of labor and resources in affected areas, including Liuheng Island, Energean said.

Energean awarded the contract for the delivery of the FPSO to TechnipFMC back in 2018.

Due to the novel coronavirus outbreak, the engineering and construction giant might be forced to declare a force majeure event and ask for more time to deliver the FPSO.

Energean said: "Energean has received a notice under its EPCIC contract with TechnipFMC in relation to the travel restriction constituting a Force Majeure event, potentially entitling TechnipFMC to claim an extension of time under the EPCIC contract. Energean has, in turn, issued corresponding notices to its buyers of Karish gas and other relevant counterparties."

The oil and gas company said that "the rapidly evolving nature of these circumstances is such that it is impossible, at this stage, to determine the overall impact, if any, on Energean's project timeline."

However, Energean said, work is still progressing well in the Chinese yard with approximately 550 staff on-site; and Energean is working actively with TechnipFMC to ensure that all appropriate measures are being taken to avoid or mitigate any delay.

OEDigital has sent an email to TechnipFMC seeking comment and more info. We will update the article if with any response we receive.

"Based on the information available at this stage, Energean still expects that the Karish Project remains on track to deliver first gas in 1H 2021. Energean shall provide further updates as the situation clarifies. Energean highlights the importance of guaranteeing the health and safety of its employees and contractors and will act in accordance with instructions and guidance from the UK and Chinese health authorities," Energean said.

As of 10 a.m., Central European Time on February 5, 2020, 25 countries have reported confirmed cases of the new coronavirus, including China, where 24,363 people had contracted the virus, or over 99% of all cases, according to the World Health Organization. In all other countries, 191 cases have contracted the virus. CNN has reported that at least 560 people have died so far.

According to a statement by WHO on Wednesday, the international community has launched a $675 million preparedness and response plan covering the months of February through to April 2020 to combat further spread of the new coronavirus outbreak in China and globally, and protect states with weaker health systems.

WHO's recommendations to prevent infection spread include regular hand washing, covering mouth and nose when coughing and sneezing, thoroughly cooking meat and eggs, and avoiding close contact with anyone showing symptoms of respiratory illness such as coughing and sneezing.

Worth noting, Reuters reported on Thursday, China National Offshore Oil Corp (CNOOC) declared force majeure on prompt liquefied natural gas (LNG) deliveries from at least three suppliers, citing an inability to fulfill a contract due to the economic impact of the virus. Reuters did not say who the suppliers were.