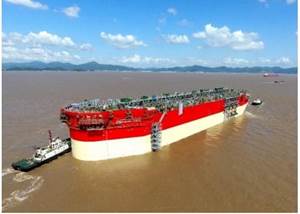 The hull of Energean Oil and Gas’ Energean Power FPSO has been undocked and floated out from the COSCO Shipyards’ dock in Zhoushan, China, about 10 months after first steel cut.

Once completed, the FPSO will be deployed at Energean’s Karish and Tanin fields offshore Israel, the international oil and gas exploration and production company said.

According to Energean, the build was completed ahead of schedule and with no loss time incidents in about 3 million working man hours. TechnipFMC is managing the project.

The Energean Power FPSO hull will remain at the Shipyards’ berth for additional construction works, and its sailaway to Sembcorp Marine’s Admiralty Yard in Singapore for the integration of the topsides is planned later in 4Q.

The Karish Development project remains on track and on budget to deliver first gas in 1Q 2021.

Energean has previously said that the FPSO is expected to sail away from a yard in Singapore in late 2020 ahead of first gas in 2021.