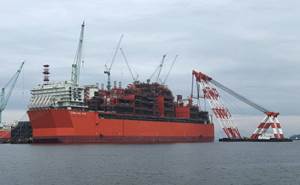 "The project is on track and the Coral Sul FLNG, being finalized in South Korea, is set to become the world’s first ultra-deepwater FLNG and the first LNG producer in Mozambique," Eni said.

"Coral South - a landmark project for the industry - will project Mozambique onto the global LNG stage, paving the way to a transformational change of the Country through the development of gas resources, one of the most effective solutions to ensure a just energy transition," Eni said in a statement.

Eni has recently said that the expected production start-up at the Coral FLNG project is in the second half of 2022.

Worth reminding, almost exactly a year ago the last of 13 topside modules was aboard the Coral-Sul FLNG facility, being built by Samsung Heavy Industries in South Korea.

Construction of the Coral-Sul FLNG hull and topside modules started in September 2019. The hull was launched in January 2020 and this was followed by the lifting of the first topside module in May 2020.

According to Eni, the Coral-Sul FLNG is the world’s first newly-built deepwater floating liquefaction plant.

With a capacity of 3.4 million tons of liquefied gas per year, the FLNG unit will be located offshore Mozambique and used to produce gas from Coral offshore gas field in Area 4 of the Rovuma Basin.

The project is based on six ultra-deepwater wells in the Coral Field, at a water depth of around 2,000 meters, feeding via a full flexible system the Coral-Sul FLNG. The Coral field has approximately 16 trillion cubic feet of gas in place and was discovered by Eni in May 2012.

Among other things discussed at the meeting on Friday, Descalzi updated President Nyusi on the status of Eni forestry initiatives in the country, including the REDD+ assessment to protect and conserve forests across an area of over 3 million hectares on the great Limpopo transfrontier conservation area, in Mozambique, which Eni started in August 2021.

Through this REDD+ project Eni will be able to progressively achieve Net Zero scope 1 and 2 emissions for its equity share in the Mozambican upstream projects and potentially supply the Coral South project with the carbon credits needed to reach the carbon neutrality. REDD+ projects have a significant impact in terms of community benefits and on biodiversity protection, in addition to GHG emissions reductions.