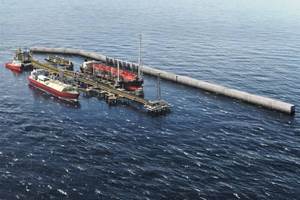 Golar LNG has informed that force majeure events have been lifted on the GIMI FLNG the company is building for Greater Tortue Ahmeyim project in Senegal/Mauritania offshore area, and that the project would be delayed for 11 months compared to the original schedule.

Golar and BP in February 2019 signed a 20-year deal for the charter of a floating liquefied natural gas (FLNG) unit, Gimi, for the project in Senegal/Mauritania, with the expected start-up in 2022.

Golar then tasked Keppel with the conversion of the LNG carrier Gimi into an FLNG unit. Golar at the time said that the construction of FLNG Gimi was expected to cost approximately $1.3 billion.

However, a little over a year later, BP in April 2020 sent a notification of a force majeure event to Golar, claiming it wouldn't be able to accept the FLNG unit on the target connection date in 2022, due to the outbreak of the coronavirus, and seeking to delay the delivery by a year.

Golar was at the time puzzled how a force majeure discovered in March and declared in April could immediately impact the schedule by an estimated one year.  Nevertheless, Golar too, in anticipation of a delay, started discussions with the main building contractor, Keppel, "to re-schedule activities in order to reduce and reprofile its capital spending commitments for 2020 and 2021."

The company also recently said that the construction works had been delayed due to the outbreak of COVID and a lockdown in Singapore and that recovering the lost yard time within the original schedule was no longer possible.

Now, in a statement on Thursday, Golar said that it has confirmed a revised project schedule with BP.

"The revised project schedule will result in the target connection date for the converted floating liquefaction natural gas vessel Gimi, previously scheduled for 2022 [...] being extended by 11 months.

Golar also said that its subsidiary Gimi MS Corp. and BP have now received and given notice to each other confirming with each other the revised project schedule and that there is no Force Majeure event ongoing. The terms of the charter deal are unchanged.

"The confirmation of a revised project schedule with BP and the exchange of notices is expected to facilitate the conclusion of ongoing discussions with both engineering, procurement and construction contractors and lending banks regarding the adjustment of construction and financing schedules, respectively," Golar LNG said.

Once delivered, the Gimi FLNG will be used for the development of the Mauritania and Senegal cross-border offshore gas development Tortue/Ahmeyim, one of Africa's deepest offshore projects at 2,000 meters below the sea's surface.

The project will produce gas from an ultra-deepwater subsea system and mid-water floating production, storage, and offloading (FPSO) vessel, which will process the gas, removing heavier hydrocarbon components.

Gas will then be transferred to the GIMI FLNG at a nearshore hub located on the Mauritania and Senegal maritime border. The FLNG facility is designed to provide circa 2.5 million metric tons of LNG per annum on average. Total gas resources in the field are estimated to be around 15 trillion cubic feet.

Kosmos Energy discovered the Greater Tortue Ahmeyim field in 2015, and BP signed onto the project through an agreement with Kosmos in 2016.

BP is the project operator. The partners sanctioned the first phase of the project development in December 2018.